Some friends and I went to Green Thumb farm in Tagaytay for an outing. Here are some shots from my camera phone. The gerberas were especially charming! The trip was very educational, as one of the caretakers answered our questions about how these flowers are grown. If you’re looking for a fruitful outing with family and friends, a trip like this is a great idea. 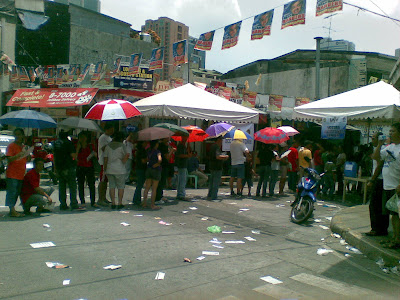 This is my fourth time to vote. And of all those times, I just have to say that I’ve never been more proud of my countrymen than in today’s elections.

When I got to the precinct at around 10:30 am, there was a queue of around 500 meters. I know many of those who I joined in the queue wouldn’t ordinarily bear with that kind of a line. The sun was shining like there was no tomorrow, enough to scorch any Pinoy’s kayumanggi complexion. But no, we stuck it out, with our umbrellas, fans and drinking water. There were even people distributing bottled water for free (how grateful we were!) and, further down the line, I discovered a tent manned by UNTV where one can get a cup of water. Thankfully, the precinct was also near a wet market, which meant there were enough food vendors around. I treated myself to a glass of taho to strengthen myself before entering the crowded public school. 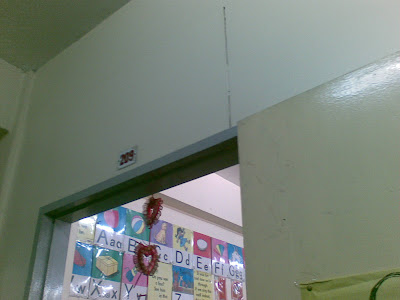 My family and I were very lucky. The room where our precincts were lodged had very few people in it, so halfway through the queue, a man picked out those who were assigned to this room. We skipped the rest of the line and headed straight to Room 209. We queued up again in that room, appreciating the three electric fans that cooled us a little. We then took our ballots and shaded those ellipses (which, I may add, are not circles. Ang oblong po ay hindi bilog. I’m sure many school teachers will have a hard time persuading preschool kids to accept that after this year’s COMELEC campaigns). We smoothly fed our ballots into the PCOS machine. Two hours in all; that certainly went well. The others probably spent around four hours because of the long queue. 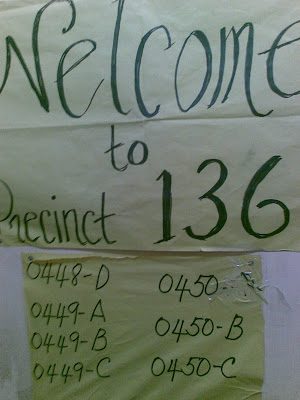 Yes, there were complaints, but there could have been so much more. Yes, we all expressed our dismay at this seemingly slower process, but many of us also gave our government the benefit of the doubt since it’s the first time we’re implementing an automated system. Yes, some people gave up, but many did not. Yes, some PCOS machines broke, but many waited five or six hours for them to get fixed. All that just to get your own vote as a Filipino in.

If there’s one thing that Filipinos could teach the whole world, I think it’s this: that suffering is meaningful if you’re doing it for someone or something you love. People in developed countries, however progressive they may be, tend to be a lot more unforgiving of such inconveniences. But not we Filipinos. Whether it be going out of the country to feed our family, giving up some comforts to help flood victims, or bearing such heat for hours, we don’t mind as long as that love is in place. Today, out of love for our country, or even a candidate, the nation bore its sufferings for a purpose.

Let’s not make the mistake of ruining that strength. Yes, we can legitimately want the comforts of life, but let’s keep in mind that life is necessarily better when it’s more comfortable. What’s important is to love and to have the right loves. And sometimes, when suffering is in the way of that love, the Filipino’s greatness shines when he perseveres through it.