In her Harry Potter books, J.K. Rowling was unto something when she wrote about how each wand had to be the perfect match for its witch/wizard owner. In real life, wands have to be matched to the owner, too. Mascara wands, that is. Now before you brush me off as a wacko Potter fan, allow me to elaborate.

More than the actual formula, I think it’s the mascara wand that makes a massive difference to your lashes in giving you the effect you desire. Generally, my only criterion formula-wise is that it be waterproof. I take more time in deciding on the wand shape.

For instance, when I want my lashes to look defined and well-separated, I will use a mascara that has a smaller wand, with shorter bristles. This allows me to really get to the lashline and define my lashes from root to tip.

Now when I want major volume, I will opt for a bigger, thicker wand. This will allow me to really build up my lashes and get them thick and lush after as little as one or two coats. (Me being me, I usually layer more than that.)

Here’s a picture of a wand that will get you volumized:

I also took a picture of these two wands side by side just to help you see the difference in their shape and size.

Oh and while we’re on the topic of mascaras, nowadays, there is such a thing as lash primer. You’re supposed to apply it to your lashes first, and then follow with mascara. I tried using it once and it makes your lashes look thicker. Personally, I think you can get the same effect with multiple coats of mascara. Some lash primers have added ingredients, e.g. they claim to make your lashes longer/healthier. I haven’t used one for a long enough period of time, so I really can’t comment about that. But I’ll show you some pics of a lash primer that I pilfered from my mom.

This is an Estée Lauder one, and the tube looks like this:

And here’s a close-up shot of the wand and the formula:

You see how ghastly white it is? That’s why you have to layer mascara on top, or risk looking like a weirdo.

So when you go mascara-shopping, apart from the formula, do check out the wand that comes with the tube. Make sure it will work for the type of lash effect that you prefer.

This post was written by Anj de la Cruz. 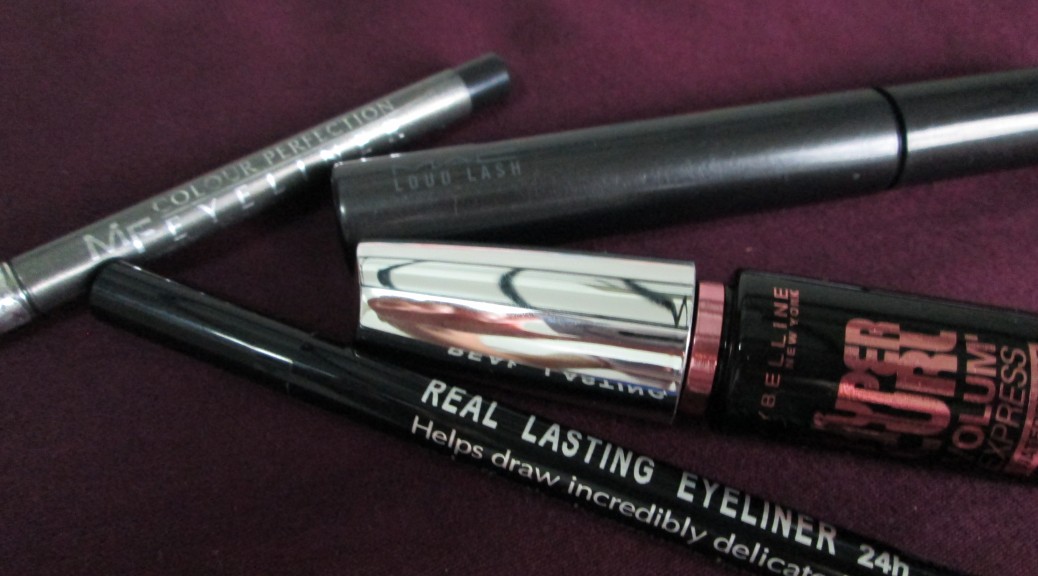 I’ve heard that people with an oily skin type are lucky because the extra moisture in their skin slows down the aging process. (If this were a Facebook post, this is where I’d hit the “Like” button.) However, I can’t help but be frustrated when my carefully-applied make-up melts after only an hour or two; I have better things to do with my time than to reapply my “face” several times a day. And so, over the years, I’ve made it a habit to take note of and experiment with techniques and products that will help my make-up to last longer.

Here are some tips, tricks, and products that you can incorporate into your make-up routine:

Use a primer. Applied before foundation, this product is especially crucial for those with combination/oily skin, but those with drier skin types will also benefit from using this product. A pea-sized amount is usually enough to cover the entire face; you can also blend it down unto the neck area.

Work foundation into the skin. Different methods of application—by hand, using a sponge, using a brush–are recommended by different make-up artists; experiment and stick to the method you prefer. The important thing is to blend well with gentle but firm strokes; make sure the product is not just sitting on the surface. Also, setting with powder helps. Blend the powder well, too, so your face doesn’t look cakey; you don’t want to look like an espasol.

Spend a bit more time on your eyes. You can opt to use an eyeshadow primer. But the key to getting your eyeshadows to last is to apply, blend, apply, and blend again. Layering is key. You’ll get more staying power if you apply a little product at a time and slowly build up intensity rather than applying tons of shadow all in one go. Also, matte finish shadows–as opposed to shimmery or frosty ones–generally stay longer on  the lids.

Use waterproof foundation and eye products if you have them. These really make a difference in terms of longevity. Keep in mind though that waterproof make-up will usually require special removers. Oh and if you will only ever invest in one waterproof product, let it be mascara.

A make-up fixative is helpful, but not necessary. After you’ve finished applying your products, hold the fixative about 12 inches away from your face and spritz 3-4 times to cover your face and neck; wait awhile and then blot the excess lightly with a facial tissue. This should help your look stay in place even longer.

Retouching is key. During the course of the day (or night), lightly blot any areas that have gotten a tad shiny with oil absorbency sheets or one sheet of facial tissue. Dust powder lightly only on the areas that need it, since applying all over could make you look cakey. Assuming you applied your makeup well in the first place, the only other makeup product that you will need to reapply is lipstick/lip gloss.

This post was written by Anj de la Cruz.